What is Woke Ideology?

An introduction to social justice and woke ideology.

The term “woke” was originally popularized by progressive activists who saw themselves as having (metaphorically) awakened to bold new insights about the racism, sexism, homophobia, and transphobia that supposedly contaminate every corner of western societies. In recent years, however, “woke” has been more commonly used as a pejorative term to describe extremists who extrapolate these well-intentioned principles in a radically ill-advised manner. In many cases, this includes performative gestures—on social media or otherwise—that are clearly intended to burnish the ideological bona fides of woke individuals and groups, as opposed to providing real assistance to the allegedly oppressed masses whose well-being ostensibly lies at the core of the woke mission.

Some woke ideological positions are so extreme that they directly contradict core tenets of liberalism, including free speech and due process. At its outer edges, moreover, wokeism closely tracks policy prescriptions associated with reactionary 20th-century social conservatives. In schools, government agencies, and woke corporations, it has become increasingly common to celebrate racial segregation as a means to create “affinity groups.” Some woke ideologues and diversity consultants also claim that qualities associated with professional life, such as punctuality, attention to detail, and a commitment to merit, betray the influence of a nefarious force called “whiteness”—thereby channeling the racist idea that non-white individuals cannot meet baseline standards of intellect and behavior.

Woke manifestos and policy documents typically embed slogans that cast entire swathes of the western world as “oppressive” (or even intrinsically genocidal), and which call upon followers to engage in gestures of righteous “anti-capitalist” rebellion. Canada, in particular, is routinely denounced as a “white supremacist” state whose very existence must be “disrupted.”

Unlike traditional forms of leftish thought, which have been aimed in large part at assisting working-class individuals, wokeism exhibits an unconcealed hostility toward underprivileged members of society who have not internalized faddish ideas about race and gender. Woke ideas are communicated using academic jargon densely cluttered with newly conceived acronyms such as 2SLGBTQQIA+, AMAB, and BIPOC. As with many cultish movements, the unintelligible nature of this idiom is treated as a feature not a bug, since mastery of such terms permits an acolyte to signal his or her elect status within a woke organization or clique.

In other words, wokeism not only consists of a set of anti-liberal ideological concepts masquerading as progressivism, but also as a status-seeking strategy within upper-middle-class white-collar social and professional subcultures.

Many highly woke proponents plainly imagine themselves as secular priests, communicating revealed truths to their (more ignorant) workplace or classroom parishioners. While their language often is full of nominally self-incriminating flourishes about “whiteness,” “internalized white supremacy,” and their status as “settlers living on unceded land,” such admissions are actually intended as badges of enlightenment—much as a religious fundamentalist might demonstrate his or her devotion by pontificating about the shameful depths of his or her original sin.

Overall, woke ideology rejects the idea that human beings are fundamentally alike insofar as we all might enjoy the benefits—and observe the responsibilities—of a single, commonly observed social contract. Instead, society is conceived in dystopian terms, with “intersectionally” delineated groups experiencing daily life as an endless series of joyless, spiritually exhausting struggles for their very existence. Like all totalizing belief systems, it leaves little room for dissent, casting even minor doctrinal disagreements as manifestations of injurious bigotry that must be investigated and punished.

This definition of “woke” is written by Canadian journalist Jonathan Kay.

Konstantin Kisin addresses the Oxford Union and gives a critically acclaimed speech on the damage caused by woke culture. 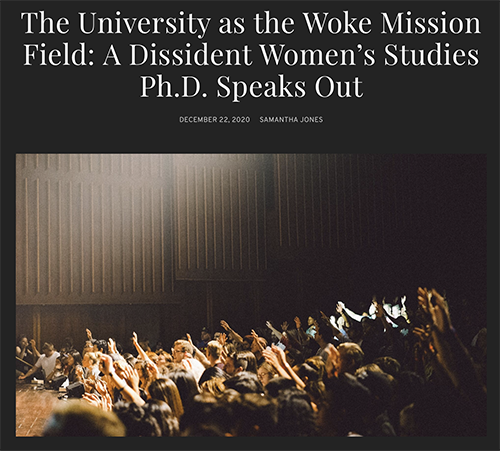 A significant number of young women have identified the above article as being key in having helped them begin their intellectual journey to escape the social justice "woke" cult.